We were contacted by the organization to evaluate the existing three-field sports facility to improve the irrigation system, which was designed in 1979 and built in 1985 by David Gorcey, RLA 1790.

The renovation included the addition of a variable frequency drive (VFD) pump to boost the site pressure from 50 to 90 PSI allowing the use of higher efficiency turf rotors.

Since the project was intended to be phased over two years, it was imperative to incorporate complex isolation valve locations on a multiple looped mainline to allow future phases to operate after the initial portion was complete.

The system uses a moisture-based, two-wire decoder control system manufactured by Baseline.  This allows the operations manager the ability to irrigate based on field soil moisture using multiple sensors located within each field.

A brick dust infield system provides quick wet down capability using a combination of high-speed rotors and separate control valves.  A simple “program start” on the cell phone application allows the manager to apply just enough moisture on the infield prior to the start of any game.

Sprinkler layout considered the placement of part-time tee ball fencing in the outfield.  Using the rotor’s spray trajectory, the 42-inch-high fencing required a minimum setback of 8 feet for any sprinkler to allow the stream to clear the fence while minimizing blockage.  Yes, the layout looks somewhat outlandish, but it continues to provide uniform coverage with or without the fencing.

Thank you to Cory Rosenberg and the West Los Angeles Little League for a great opportunity to work on this project together. 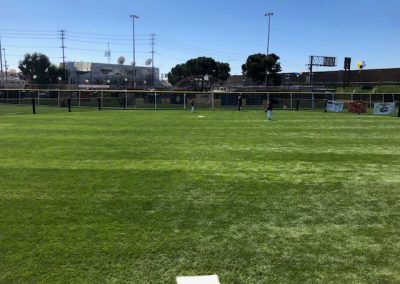 The original “Bad News Bears” (the movie) was filmed in Chatsworth at Mason Park, but the Bad News Bears Field in Westwood has a legitimate connection to the original movie.  It was here in 1958 that Burt Lancaster signed up his son Billy for Little League (his team: The Giants) and Bill Lancaster would later draw from those experiences for the screenplay that inspired the original movie, two sequels, a TV series, and Hollywood remake.

After Bill Lancaster died a decade ago, his friends persuaded the Los Angeles Parks and Recreation to rename the baseball diamond after his creation.